Property for sale in Greece 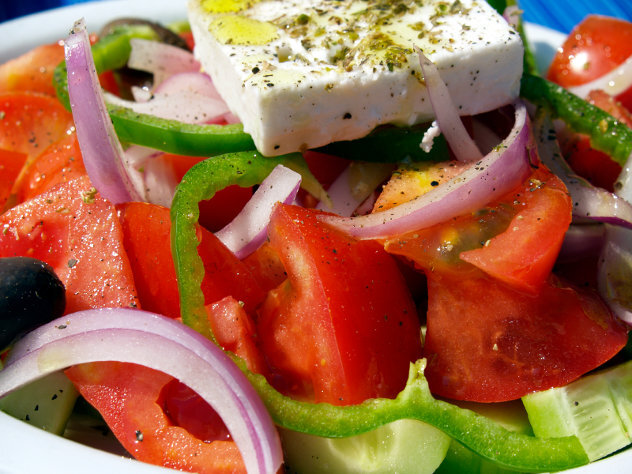 The Greek meal is not an end in itself, but rather a pretext and an occasion and an initial spark of sociability (Johannes Gaitanides)

As one of the Mediterranean cuisines, Greek cuisine is characterised by the consumption of plenty of vegetables, seafood and olives (mostly of the Kalamata variety for consumption, Koroneiki for oil pressing), along with the herbs and spices typical of this region, such as Rigani (oregano), mint, thyme, sage, cinnamon and paprika.

The typical Greek cuisine prefers main dishes that are prepared in the oven and either kept warm or eaten lukewarm anyway. Bread, mostly Greek white bread, is eaten with all dishes. In general, you cook with a lot of olive oil. With the general increase in living standards in the last decades of the 20th century, meat consumption has risen sharply. In addition to sheep and goat meat, a large proportion of pork and beef has also been consumed since time immemorial, and a large part of it is imported. Although the number of sheep and goats kept in Greece is high, sheepmeat must be imported from New Zealand, for example, to meet domestic demand.

In the coastal regions, fish still plays an important role in the diet, even though fish prices have risen sharply due to overfishing in the Mediterranean.

The nature, distribution and composition of many Greek food dishes can only be understood in connection with the Lent, which is much longer and more strictly observed in Orthodox churches. This fact is often overlooked even when assessing the health of Greek cuisine. In ten weeks of fasting the consumption of most animal food is completely renounced. The popularity of seafood or squid, but also of sweets such as Halva, is enhanced by the fact that these foods are exempt from fasting. For the pre-Easter, the longest Lent, a large selection of wild vegetables (chorta) and snails are available in rural areas. Taramosalata (fish paste) is a typical Lent supplement.

It is typical of the food in a Greek restaurant that the person who invites you to dinner orders all dishes, usually in abundance. At the beginning of the meal, a series of starter plates are usually served, each of which can be combined to create its own plate at will. If grilled food is served as a main course, e. g. lamb ribs, the waiter puts a plate of meat in the middle for everyone, from which everyone takes himself. If one of the guests does not like the main course (for example because of the meat type), a separate smaller plate is ordered for him.

Simpler restaurants have a showcase with the dishes of the day. The guest either lets the waiter present them or goes to the counter himself. Larger restaurants offer this service in addition to the à la carte service, as many guests want to convince themselves of the quality of the food.

The custom in Central Europe, that everyone orders a main course with side dishes on their own plate, is rather unusual in Greece. Usually people eat together at a late hour, especially during the summertime due to the high temperatures. For the Greek population, conviviality is just as important as the food itself.

Gyros is a traditional Greek style spiced, sliced pork meat from a vertical grill. Gyros is prepared as a simple quick dish only in snacks or small grill restaurants (Greek psistariá) where it is served with pita. Restaurants in Greece do not usually serve gyros.

Souvlaki, meat skewers of different sizes, either with lamb or pork, are served almost exclusively in snack bars and in restaurants and restaurants equipped with a charcoal barbecue (sta Karvouna). The small lamb skewers, on the other hand, have a long peasant tradition.

Tsatsiki, a yoghurt dish with garlic, cucumber and olive oil

Kalamaria tiganita/psiti squid fried or grilled in a pan

Chtapodi Scharas, fresh octopus arms on the grill, with olive oil and/or vinegar

Moussaka, a casserole with fried potato slices, minced meat, eggplants fried in olive oil and a layer of béchamel sauce crumbled during the baking process.

Pastitsio, a pasta casserole made of minced meat and macaroni

Stifado, a stewpot of veal or lamb, many small onions and cinnamon sticks. Very often also from rabbit meat, rarely from octopus.

Saganaki, a piece of fried cheese

Traditionally, seasonal fruit or home-made ice cream is served as a dessert after the meal. Sweet desserts were more likely to be served with an afternoon coffee, but they have also become popular as a dessert. These "sweet" desserts can also be found in Turkish or Middle Eastern cuisine and are presumably of Byzantine origin. They are very sweet and heavy and often soaked in honey syrup. These include Baklavas (μπακλαβάς), Galaktobureko (γαλακτομπούρεκο, a semolina casserole), Kadaifi (κανταΐφι), Loukoumades (λουκουμάδες, oil-baked cakes in honey syrup), Moustalevria (μουσταλεβριά) or various cakes, which vary from region to region. It also includes chalvas (χαλβάς), made from cinnamon, honey and liquorice as well as sesame.

Yoghurt is also served as a dessert, mixed with honey and walnuts. The yoghurt used is cream yoghurt, known as Greek yoghurt.

In summer, instead of desserts, fruits are served, such as melons, honeydew melons and apples.

This article of
de.wikivoyage.org
is based on
Griechische Küche
. Translated from the German language by Jos Deuling.

Property for sale in Greece