According to Spanish estate agents, house prices in Spain have fallen between 20% and 50%. In addition, there is a huge surplus of unsold new homes. The spanish property collapse mainly affects the Spaniards but also foreign homeowners.

It is estimated that there are around 600,000 new Spanish homes for sale at the moment, and there are 200,000 houses under construction. According to the Bank of Spain, property prices fell by 17% since 2007. Insiders know better. The Bank of Spain based the percentage on the balance sheet value and not the actual selling price. A developer has, for example, a house on the sheet for 200,000 euros while the asking price is only 100,000 euros. 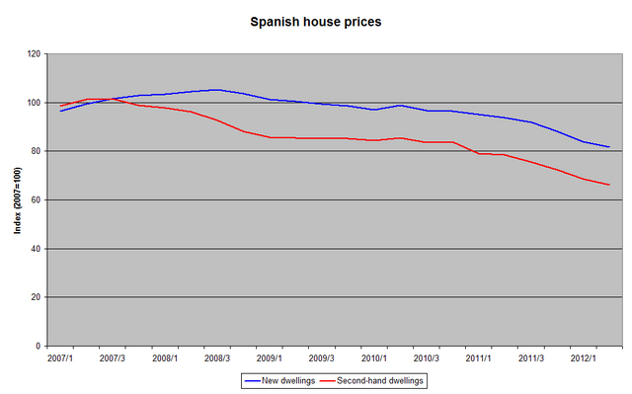 The market for second homes is worrying. Some examples. A 3 bedroom bungalow near Valencia was offered for sale by the foreign owner for 120,000 euros, then for 85,000 euros and now for 70,000 euros, and still no buyer. A new villa on the Costa Blanca dropped from 235,000 pounds to 140,000 pounds. The developer can’t get rid of it. The Balearics seemed immune to the crisis, but even on Mallorca and Ibiza prices dropped by 40%. Especially in the upper segment there are bargains. Brokers expect prices to fall further.

The Spanish housing crisis is an opportunity for foreigners to buy a cheap holiday villa or apartment. You have to bring your own money because it is currently not easy to get a Spanish mortgage. When the housing market was still booming Spanish banks provided too many mortgages. After the spanish property crash, the big question is whether the banks will get their money back. Banks are now very reluctant to provide a mortgage. If you want to take advantage of the crisis, you'd better raise the money by getting a second mortgage in your country of residence.

Because of the economic crisis the number of new projects has fallen sharply. Nevertheless the housing supply will increase significantly in the coming years. The crisis takes its toll on many Spaniards. Unemployment has risen to 20% of the workforce. There are many repossessed houses in Spain. The owners can not pay their mortgages and the banks are forced to sell their house. Bank repossessions are sold through an auction or ​​directly by the bank. Not only Spaniards have a tough times. There are also many homes on the market from British owners who have financed their Spanish home at the peak of the market with the surplus value of their homes in the UK.

Foreigners who have purchased a holiday home in Spain in recent years are confronted with a huge value reduction. It’s much harder to sell a house thanks to the availability of a lot of new built houses. A number of foreigners also have another problem. They have unknowingly bought an illegally built house. Local governments would benefit from the housing boom and have randomly approved project requests. Often in conflict with the zoning. There were also a lot of cases where local officials are bribed. A number of municipalities has now retroactively rejected these requests.

For example, last month in South East Spain nearly 13,000 new homes were declared illegal. In a region, which is very popular among foreigners, some 900 homes are to be demolished. The remaining 12,000 will be legalized. The owners of the demolished homes lost their money and started an action group. They want to be compensated. Such action groups are now active in many other Spanish tourist areas.

Search for Spanish property and real estate for sale in all regions of Spain. Golf villas, appartments, Cortijos and farmhouses for sale in Andalusia and the Costa Blanca
More info
Easy to understand.Shows you the pitfalls and how to avoid them.
More info

Resource links for Taxes in Spain