The French and their Food: Bread, Butter, Petit Dejeuner, The Menu and Wine 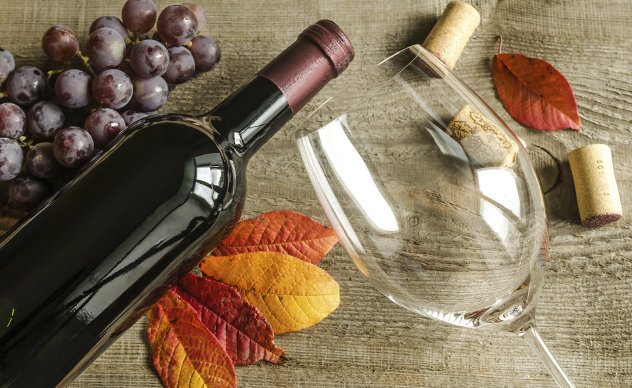 What would France look like if they hadn't invented the baguette? Nothing to soak in the coffee and no village meetings early in the morning. Nothing to use as a fork when eating - although this farming habit is becoming less and less visible....

A pain au chocolate is a croissant filled with chocolate. A chausson au pomme is a croissant with apple. An ordinary croissant is made with margarine, but those with real butter are much tastier: Crossaints au beurre. Even better are those made with the best butter from France: the Charente fair. A selection of croissants and chaussons in a small format is called viennoiserie.

The best butter comes from the west: Normandy, Brittany, and Charente. Those from the Norman Isigny or the Charente-Poitou have a real 'appellation'. The village of Echiré in the Charente produces the very best butter in France, but it is not available everywhere. Butter with coarse salt grains (Beurre au sel) comes from Brittany.

A cup of soft coffee to soak the baguette and that's it: A real French Petit Dejeuner. For them, it's no more than a bite to eat before the big food can start: The Dejeuner at 12 o' clock. Tourists are allowed some extras at breakfast. The large hotels serve a continental breakfast with jams, croissants, fruit juices, eggs, and yogurts.

In the restaurants, there are always 1 or more menus, consisting of an appetizer, a main course, and a dessert. Sometimes there is also cheese between main course and dessert: Fromage. If a plateau with lots of large cheeses is placed on the table, it is not the intention that everything should be eaten! Most restaurants serve the cheeses directly on a plate, or from the chariot, the cart with cheeses from which you can choose. Sometimes desserts are also served from the chariot. An average menu cost between 22 and 45 Euros. In the afternoon there is always a cheap menu for around 15 Euro.

Sometimes there is a 1/4 carafe wine included in the menu, but usually, the wines are offered per whole or half bottle at high prices. In the wine regions, a can of wine - a pichet - is generally a good and cheap choice. Outside the wine regions, the quality of a pichet is often dubious. Good wine always has an Appellation, which guarantees that the wine is produced under strict rules and indeed comes from the region indicated by the label. Still, wine that has no appelation can be delicious. These Vins de Table are cheaper, but they do not always come from the area mentioned.

The most famous wine regions are:

Loire - high-quality white wines: Sancerre, Pouilly Fumeé.
Bordeaux - dark, red wines of the great Chateaux. Top quality, great price.
Languedoc - red and rosé wines from the largest wine region in France. In the past, of inferior quality, nowadays easy to drink at affordable prices. An excellent white wine from this area is the Picpoul.
Cote du Rhonê - light red and rosé wines. Tavel is the most famous rosé.
Chateauneuf-du-Pape is known for its red wine.
Beaujolais - fruity red and white wines, known from the Primeur. Every year in November, the first wines of the new harvest come from here.
Burgundy - high quality red and white wines: Meursault and Chablis are the municipalities with an excellent white wine comes. Savigny-le-Beaune and Nuit Saint Georges produce outstanding red wines. But here too, good but not cheap.
Alsace - famous white wines such as the Riesling (Perfect by the choucroute - sauerkraut from this region), Gewürztraminer and Pinot Gris (formerly called the Tokay d' Alsace, but since 2005 this is no longer allowed because of a Hungarian wine of the same name).

Not all wines are meant to be drunk at the main meal. A Muscat is a sweet white wine that is drunk as an aperitif or with dessert (Baumes-de-Venice, Montbazillac), while the Banyuls from the Roussillon looks more like a port.

Champagne can be drunk all day long on any occasion, but they get the least benefit from eating. In the region itself, Champagne is often accompanied by a long finger biscuit of Champagne. The big Champagne houses are well known to most people (Mercier, Moët & Chandon, Bollinger, Tattinger), but less known and of top quality are Roederer and Krug.

As if time has stood still, that's the way francophiles prefer to see life in France. A baker who prepares fresh croissants early in the morning. A 2CV driving over a country road lined with sycamore trees. Grape pickers in the vineyards. A village hotel on a small square with a fountain and a Logis de France. But that France is becoming increasingly difficult to find, it's retreating in inhospitable corners
Read more
More articles
Experiences of buying a house in France
Midi Pyrénées Propriétés - Your real estate agent in the South of France
France Property Guides Reader Survey 2020
Ask many questions before buying a house in France
HouseFrance page on Facebook, Twitter and Pinterest
Resource links for Property Prices in France
Arranging an ideal loan in France
Glossary French Residential Buildings
The French and their Food: Cheese, Desserts, Beverages, Haute Cuisine and Lower Cuisine
Resource links for Taxes in France
Should you Invest in a holiday home?
Daily live in France: festivities and holidays
Winterizing your second home in France
Your Own Campsite In France? Don't!
Will it be a moonlighter or an artisan?
Buying property in France : key players and intermediaries
Where to buy cheap property in France ?
People with property in France hit hard by new capital gains tax
Traveling in France : visiting family, small and provincial railway stations
Protection for homebuyers in France
Daily live in France: Death, Family, School, the Job
The French and their Food: Herbs, Salt, Oil, Soup, Fruit and Vegetables, Meat, Wild and poultry, Fis
The mortgage market in France
Bistrot de Pays
The pitfalls of buying property in France
Definition and Abbreviations relating to apartments (‘Logements’)
Taxe Foncière and Taxe d’Habitation
How to sell your house in France
Water supply in France through waterworks or private well?
France is a country of villages
Buying from plan in France
A few tips before buying property in France
How to move to France ? Hire a moving company or do it yourself.
Buying an existing property in France
French real estate glossary
Accommodation in France
Overview of well maintained blogs about France
Recommended reading on buying property, moving, living and working in France
Inheritance Law France
Resource links on importing and driving a car in France
Questions you should ask yourself when buying a property in France
Resource links for Etiquette & Customs in France
Buying French property : old authentic homes versus new houses
Buying a house in France through the informal circuit
Knowing what to buy in France
How to carry out a renovation project in France
Buying a leaseback in France
Daily live in France: In the shop, Tu and Vous, The world according to....
moimmo - Estate Agent in France