The French and their Food: Cheese, Desserts, Beverages, Haute Cuisine and Lower Cuisine 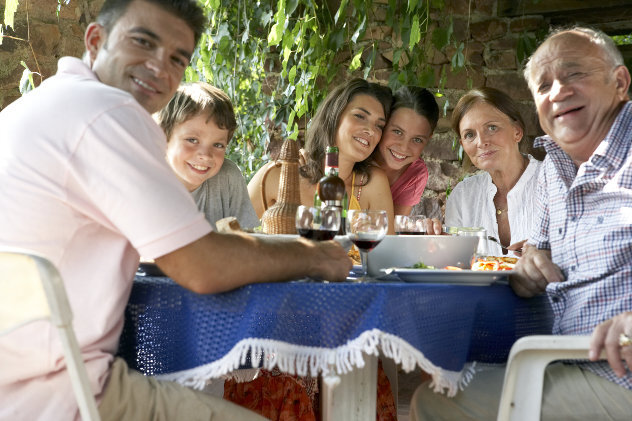 Camembert and Brie are well-known cheeses, but in France there are more cheeses than wines. The tastiest cheeses smell the most. One of the worst is a Boule d' Avene from the region around Lille, which also has an extraordinary taste. For the real lovers, so. Sharp cheeses such as Roquefort's moulded cheese are sometimes eaten with butter to soften the taste. Mildew cheese is not a spoiled cheese: the moulds in Roquefort are a kind of peneciline.

.... are usually very simple in France:...
A puddink of custard (Creme Caramel) where sometimes on top of sugar is heated (Creme Brulee), Mousse-au-Chocolate or an ile flotante, floating protein in vanilla sauce. Pâtisserie de maison is often a unique choice of homemade cakes such as tarte au pommes with apple (or fried in reverse and served with cream: The tarte tatin - you eat it warm with cold sour cream - crême fraîche).

After dinner, the coffees and liqueurs come.

In coffee, the Frenchman makes the difference between a small cup (un petit) and a large cup of grand café. There is a big price difference between large and small on the terraces. Specify clearly what you want so that the waiter does not automatically choose the most expensive option.

Coffee with milk is always a large, expensive cup of cafe au lait or café cream.
Café American is soft coffee, with extra hot water.
A Café Liegeois is not coffee, but a large ice cream with cold coffee.

Typically French liqueurs are the Eau de Vie's and Marc's, distilled from rotting fruit and fruit waste, with a very high alcohol content.

Cognac and Armagnac are the most famous Eau de Vie's, made from rotting grapes. Calvados is also an Eau de Vie, distilled from rotten apples.

Marc is the byproduct of wine production. It is distilled from the remains of the pressed grapes. Wine growers are given a certain quota to Marc's for their own use. There are significant differences in quality: A good Marc de Bourgogne can be very exclusive in taste and price.

There are digistives after eating and apéritiven for eating. Those who confuse them are laughed at, but what exactly is drunk when is often unclear. A Pastis is a safe choice for eating, liqueurs always come after dinner. Unfortunately, not everyone loves the sharp aniseed taste of Pastis.

French beers all come from Alsace. A major brand is Kanterbrau, complete with a restaurant chain (Maitre Kanter). French people often drink beer with a taste of syrup in it: Panaché.

The traditional abundant, oily farm meal where everything is fresh - the vegetable comes just from the land, the bread has just been baked, the pig has just been slaughtered - dates back to the early Middle Ages, when cities were depopulated and the livelihoods of farmers were held in high esteem. The country life and its food are deep in the genes of the French.

The farmhouse kitchen usually consists of stews (doubes) or frying dishes in which the meat is prepared with all the fat. When the meat is baked, the sauce with butter, cream and wine is bound into a solid sauce.

This authentic food has been perfected over the centuries and the highest degree of perfection is attributed to the French top chef Escoffier, who wrote a standard work on the preparation of traditional dishes, which is seen as "the cookery book for French cuisine". Cooking according to Escoffier was labelled as Haute Cuisine and a well-known tyre manufacturer started to give restaurants stars as they better mastered cooking according to Escoffier.

In response to the abundance of fat food - and in response to the narrow-minded farming habits - after 1968, the nouvelle cuisine, the new kitchen, was set up. Small amounts of low-fat food were draped on the game board in beautiful colour combinations, and at the same time the price doubled.

The nouvelle cuisine was particularly popular in the trendy restaurants in large cities, and Michelin was also very much the focus. Restaurants that cooked according to the new cooking laws dragged one star after another.

In France too, fast food is winning over slow food. Not only the MacDo's and Quicks (from Belgium, they have better burgers than MacDonalds), but also the fast restaurants at highway exits and in the shopping centres are popular with the French, who like to exchange the long stewed doubes for a quick grilled piece of meat at an all-inclusive bottom price. The most famous chains at the bottom of the French restaurants are the Courtepaille and the Flunch. The advancing Belgian chain Leon de Bruxelles offers many mussels with beer. A class better is the Buffalo, which can differentiate between red, medium and fried meat. The chains all have their own distinct corporate identity and buildings, which you can recognize from far away.

France is a country of villages

France is a country of villages. Traditionally, the land has been inhabited by peasants and soldiers, who feel well at home in the villages. The villages are situated on sunny slopes or just shaded under high trees in a lovely valley. Villages where in summer the whole community jointly uses the meal at long white covered tables with singing and dancing after the event, and where in winter the neon lighting in the village street desires a "bonne fête" for everyone.
Read more
More articles
Experiences of buying a house in France
Midi Pyrénées Propriétés - Your real estate agent in the South of France
France Property Guides Reader Survey 2020
Ask many questions before buying a house in France
HouseFrance page on Facebook, Twitter and Pinterest
Resource links for Property Prices in France
Arranging an ideal loan in France
Glossary French Residential Buildings
Resource links for Taxes in France
Should you Invest in a holiday home?
Daily live in France: festivities and holidays
Winterizing your second home in France
Your Own Campsite In France? Don't!
Will it be a moonlighter or an artisan?
Buying property in France : key players and intermediaries
Where to buy cheap property in France ?
Daily live in France: breakfast, dejeuner, evenings, church, Sunday
People with property in France hit hard by new capital gains tax
Traveling in France : visiting family, small and provincial railway stations
Protection for homebuyers in France
Daily live in France: Death, Family, School, the Job
The French and their Food: Herbs, Salt, Oil, Soup, Fruit and Vegetables, Meat, Wild and poultry, Fis
The mortgage market in France
The French and their Food: Bread, Butter, Petit Dejeuner, The Menu and Wine
Bistrot de Pays
The pitfalls of buying property in France
Definition and Abbreviations relating to apartments (‘Logements’)
Taxe Foncière and Taxe d’Habitation
How to sell your house in France
Water supply in France through waterworks or private well?
Buying from plan in France
A few tips before buying property in France
How to move to France ? Hire a moving company or do it yourself.
Buying an existing property in France
French real estate glossary
Accommodation in France
Overview of well maintained blogs about France
Recommended reading on buying property, moving, living and working in France
Inheritance Law France
Resource links on importing and driving a car in France
Questions you should ask yourself when buying a property in France
Resource links for Etiquette & Customs in France
Buying French property : old authentic homes versus new houses
Buying a house in France through the informal circuit
Knowing what to buy in France
How to carry out a renovation project in France
Buying a leaseback in France
Daily live in France: In the shop, Tu and Vous, The world according to....
moimmo - Estate Agent in France